Nardy House is specifically designed to meet the needs of people with profound disabilities. Their disabilities are physical and intellectual and they are wheelchair-confined. These people require care 24 hours a day.

Their movements are restricted; they need assistance with bathing, toileting and feeding and they are dependent on others to maintain their quality of life.

Nardy House provides a home base designed to maximise the potential of each resident. Residents interact with their local community, thereby promoting and enhancing the role of people with disabilities in our community.

The Nardy House site is located centrally on the Far South Coast, on the Princes Highway close to the small township of Quaama. Residents are able to access the major centres of Bega, Narooma and Bermagui . Each centre is about thirty minutes by car.

Landscaping has commenced of the five-acre site to allow for wheelchair access to the area surrounding the permanent accommodation, separate respite houses and additional facilities. The features of these landscaped areas will be designed to stimulate sensory responses and maximise the residents’ abilities to enjoy their gardens, their guests and their home.

The story of Nardy House and the problems the organisers have faced and what has been achieved is all told on their web site at http://nardyhouse.org.au

This video clip is also worth watching:- https://youtu.be/JyWoHfTW9TM

The Freemasons of District 49 have adopted Nardy House as an ongoing project to raise money for the purchase of much need specialised equipment which is necessary for the care of their residents.

The District Inspector of Workings, Neil Dawson, is coordinating the current fund raising effort which is a raffle with a motor car as first prize. It is planned for tickets to be available for sale in the near future with a drawing date of 2nd April 2016

The support of the community in our Masonic district is being sought for this wonderful and necessary facility. Our District covers the South Eastern part of New South Wales from Cooma, Bombala, Pambula, Baga, Moruya and Batemans Bay. 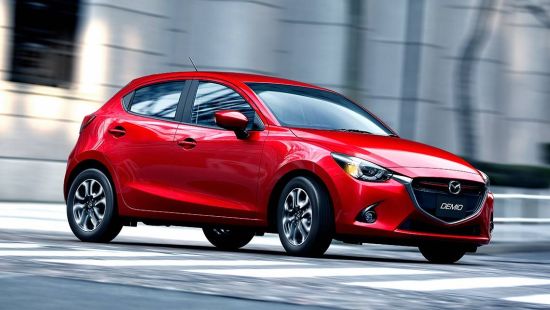 Ticket #1227 - P Cowan of Malua Bay, sister of W Bro Bill Woolridge, Worshipful Master of Lodge Eurobodalla Daylight, who is now the custodian of the car as his sister has returned home to Canada. A list of all winners follows:- 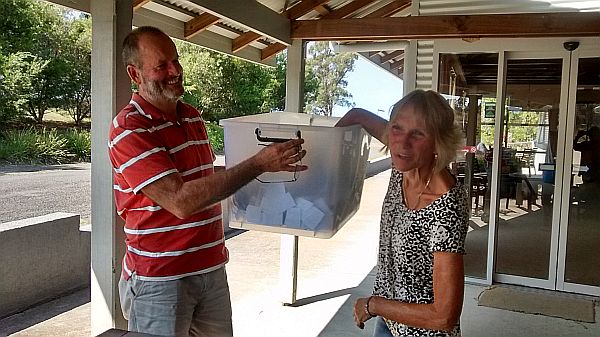 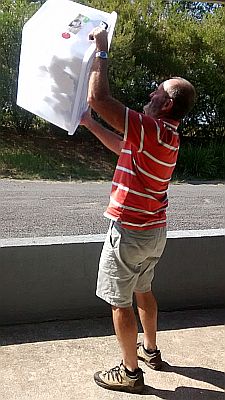 Neil making sure the tickets are shaken but not stirred. 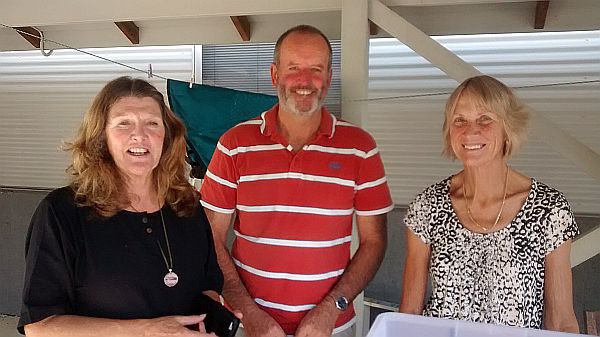 Denise Redmond Nardy's CEO, Neil Dawson and Betsy Hilton who started it all. 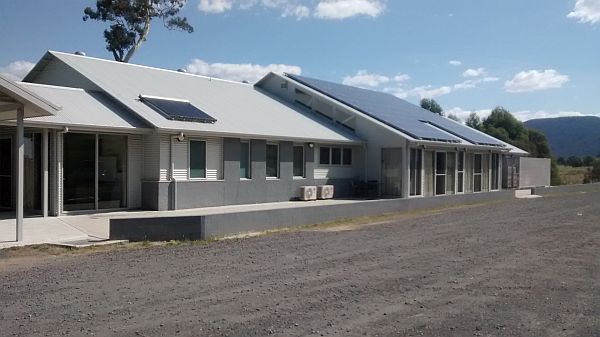 The new wing for 6 permanent residents. 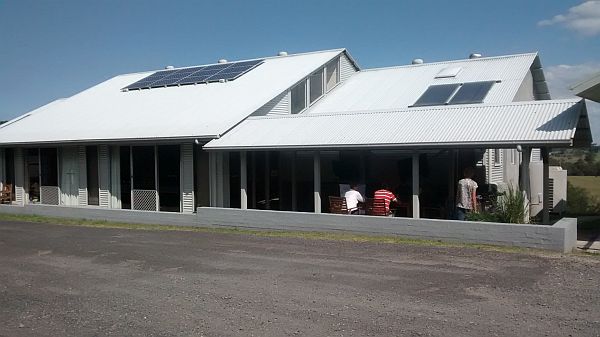 The respite centre for 6 temporary residents. 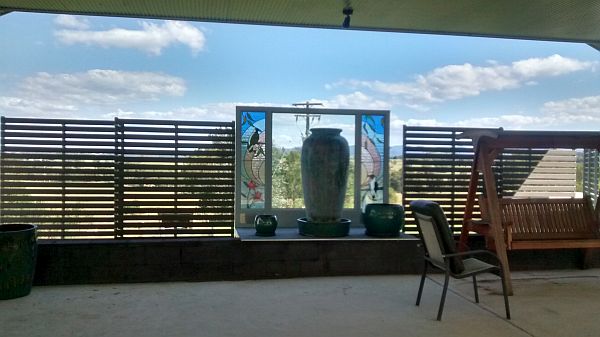 The space in between the two buildings for relaxation.

The whole purpose of the car raffle was to raise funds for Nardy house and some weeks after the drawing of the raffle a formal presentation of a cheque to Denise Redmond took plave informally on Saturday 11th June 2016. The District Grand Inspector of Workings for the District, Neil Dawson, made the presentation accompanied by a small group of Brethren from several of the Lodges in the district, namely Cooma, Pambula and Bega. The staff at Nardy put on an afternoon tea and a tour of the premises for the visitors and new friendships were formed and older ones renewed. 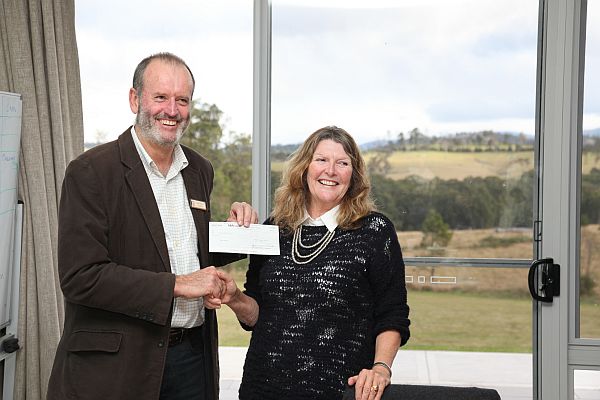 Neil presenting a cheque to the CEO, Denise Redmond.

A You tube video clip of this presentation can be viewed here:- 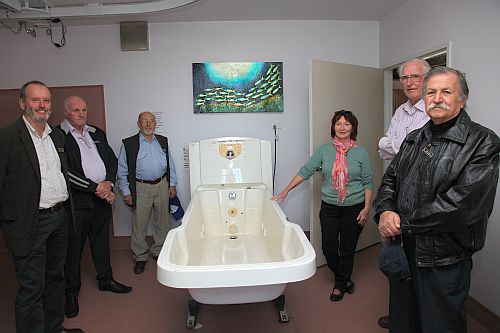 Liz giving some of the Masons a guided tour 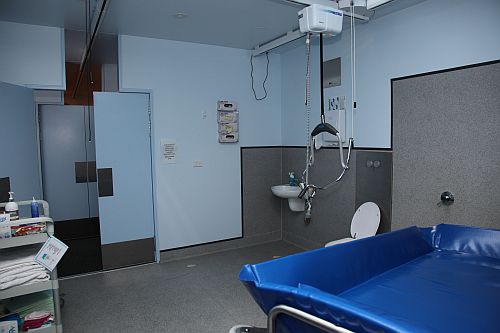 One of the three way bathrooms with overhead rails 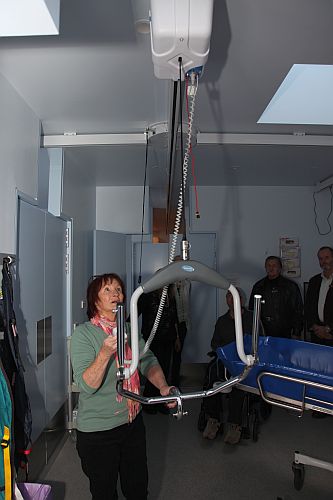 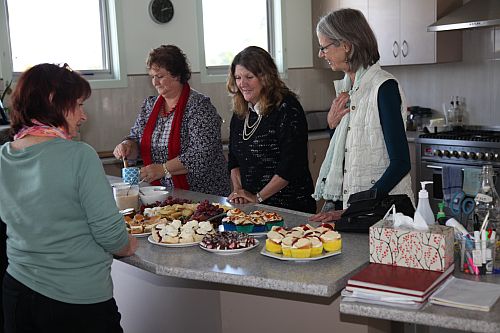 Calorie free afternoon tea (except for the cream) 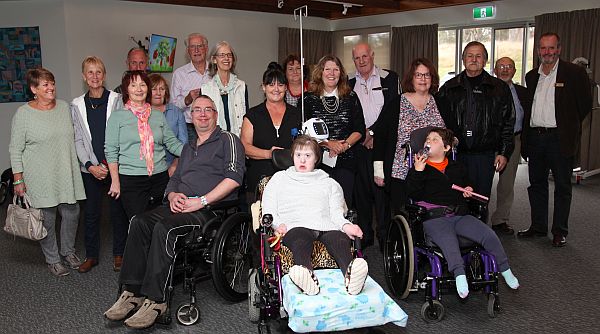 Freemasons, staff, board members, executives and residents. The "Happy House". 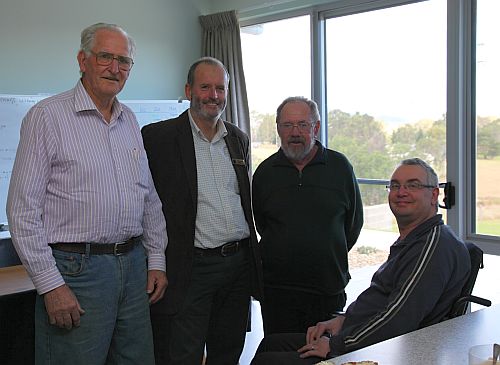 W Bro Ray Spencer, the District Masonicare Representative. Masonicare matched the funds raised dollar for dollar via an interactive grant. Neil Dawson who organised the car raffle and worked very hard in the ticket selling and promotion areas. Kevin Mulcahy who started the project when he was DGIW in 2014 followinga visit to see Bro Stuart Brennand who was spending a few days at Nardy in 2014. Liz, the manager of Nardy, showed Kevin over the premises, part of which was still under construction, and the idea of a District Fund Raising Project to assist this wonderful cause came into being.